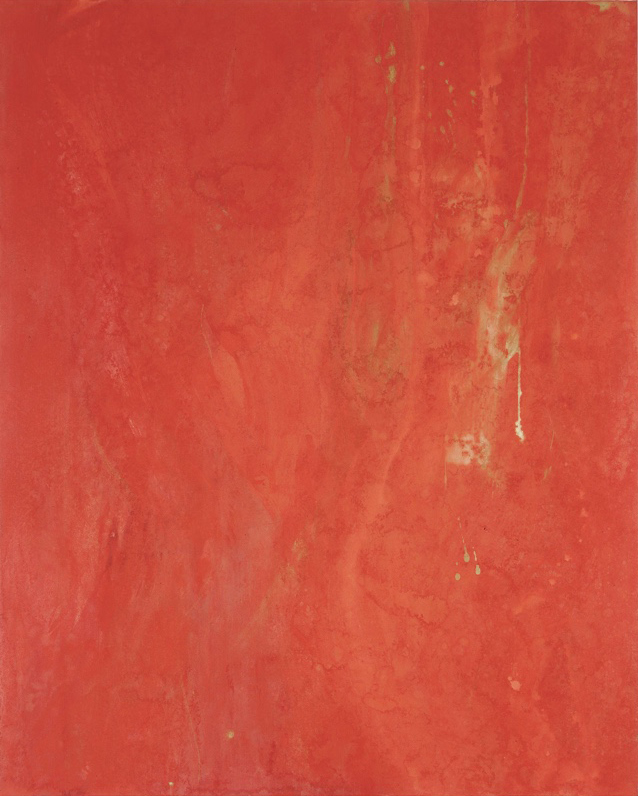 Buy Prints from Saatchi Art from $100

The Water Flames series depicts the way in which flames not only consume, but ultimately sanctify. These works recall the visual language of the apocalyptic – for example, the moody paintings of the American artist Mark Rothko (1903-1970) - using Japanese vermillion, gold, platinum powders and cochineal (An Indian dye made from an cochineal insect). The work moves the viewer’s gaze upward, even as we stand in the ever-expanding Ground Zero conditions of the world.

I was a “Ground Zero” resident. My loft was three blocks from the towers (see my essay “Fallen Towers and the Art of Tea”).

After 9/11, I began working on a series called “Water Flames” based on poems by T. S. Eliot and Dante. When monochromatic layers are executed well on Kumohada (i.e. hand-lifted Japanese paper), the paper’s buckling produces patterns akin to flames. Paradoxically, water-based pigments create flame-like patterns. In this series, as I began defining forms, I looked for particular patterns that the paper makes.

As I daily faced Ground Zero, I needed to use my imaginative capacity to turn the dark forces bringing destruction in my backyard into a vision for the future, where even fires of destruction can be a theme for generative creativity. Even the artists of the past, e.g. Eliot, Dante, Fra Angelico, and van Gogh faced the encroaching darkness of their lives.

This “listening process” of painting is very similar to improvisational jazz. The first note dictates how the entire ensemble responds. Similarly, as the paper expands with water, I am “listening” to the changing reality, as the surface informs me of my next steps. Every Kumohada paper is different, and environmental factors (the moisture level, weather patterns, and the location of where the paintings are created), become part of the “visual memory” built up in the paintings. This particular painting is also an homage to a 20th century master Mark Rothko, whose works influenced me early on.

For the gospel according to Mark frontispiece, I am using the visual language developed for the “Water Flames” series to depict flames of sanctification. In Mark, often the violent imagery of the judgment is accompanied by the process of the judgment flames becoming, for the followers of Christ, flames of sanctification. For example, John the Baptist is beheaded, disciples cast out demons, and even Jesus’ words seem (to our modern ears) harsh and condemning: “And if your foot causes you to sin, cut it off. It is better for you to enter life lame than with two feet to be thrown into hell.” (Mark 9:45)

Christ in the Flames

Yet, behind these hard sayings, the Son of Man walks into the flames of judgment reserved for us. Jesus turns the judgment flames into sanctifying flames, where we are purified, like the gold pigments used for this painting, as the heat takes out the dross.