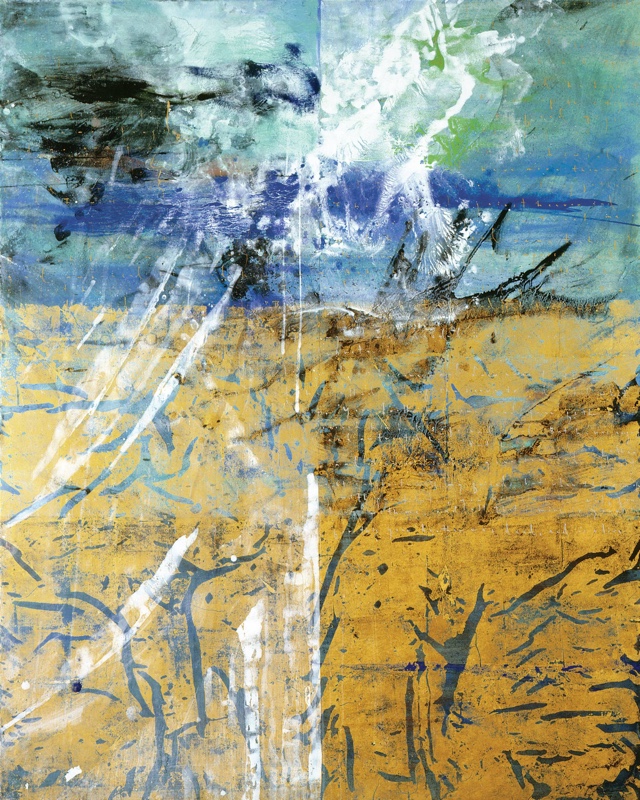 Buy Prints from Saatchi Art from $100

The title of this work, based on a well known tale of the lost son in Luke 15, is taken’s from pastor Timothy Keller’s book, Prodigal God. The visual complexity of the work depicts Fujimura’s own inner struggle between legalism of religion (the elder brother) and the “recklessly spendthrift” nature of the Father’s love in the story. In the art world and broader culture we celebrate the wayward, but lack the language to bring the lost back home. This work probes deeply into the tension that exists within an artist’s heart to love deeply – in spite of the legalism and the waywardness that prevails in the wider culture.

After spending six and a half years as a National Scholar in Tokyo to study Nihonga (Japanese Style Painting), in 1993 we returned to the United States. I was very fortunate to find a church home in a vibrant, movement oriented church in New York City: Redeemer Presbyterian Church. I found myself being challenged by Tim Keller’s vision for the city, and the church’s attitude toward culture: “We need to love the city, and be for the city, not against, or of the city.”

When Tim is asked what his favorite passage of the Bible is, he always speaks of Luke 15, the prodigal story. But I noticed that he never spoke of the story as a “prodigal son” story. He explains why in his book The Prodigal God. In it, Tim writes that the word “prodigal” does not mean “wayward” but instead “recklessly spendthrift.” In Shakespearian times, the word “prodigal” had a positive connotation, of someone committed to spending extravagantly toward restoration. Thus, Tim notes, the true “prodigal” was not the wayward son (as is commonly understood), but the father in the story.

Jesus’ message here is toward both the younger son and the elder brother, whose legalism keeps him from celebrating his brother’s return, and from having not made any effort to search out his lost younger brother. The elder brother thinks that he is doing everything right, but often does the minimal tasks grudgingly.

As an artist, a leader in the church, and as a husband and father, I myself struggle between legalism and waywardness, between determinism and grace. I painted the frontispiece for Luke in that liminal, in-between space. Therefore, visually, the painting is literally split between left and right, but with a white wing painted with pulverized oyster shell covering over both sides.